Time moves so quickly, passing by like a raging river, though most days it feels like the trickle of a small brook. Somehow we have already made it four years — four years today since we found out Joanna had passed at 25w5d and tomorrow is her birthday. Four years. It feels as if the days have gone so slowly and yet I can still remember the physical pain like yesterday. I can remember what it felt like to hold her. To touch her skin. To look at her face. To sing her special lullaby to her.

But even with all the passage of time, I don’t have to remember the emotional pain. The heartbreak. The ache for her, so much that it physically hurts. These are the things we still feel now. The effects of great loss, the toll of great love.

But even four years later, I can still say I would do it all again. I would suffer every type of pain to carry her for nearly 26 weeks. To hold her in my arms again, even for just those few short moments of time. To sing to her. I would let my heart break a million times over to be with her.

We are so blessed with our beautiful rainbow babies, both who are here because she was here. Because she showed us what love is, made us parents, and made us brave.

It’s a break up song, but I have recently come to love the song Break Up in the End by Cole Swindell. I cry every time I hear it because I feel the same about Joanna. I would do it all over, even though I know how it ends.

If you read this post and you think of it, please do something kind in honor of our girl tomorrow. A simple random act of kindness. A donation to a charity you love, or to our Facebook birthday fundraiser for Emma’s Footprints.

We love you, Joanna! Happy birthday!

I’m sorry that it has been so long since I have written to you. It’s not because I don’t miss you, because I do, every minute of every day. But lately I have been spending a lot of time cuddling your sweet baby brother and not a lot of time on my computer.

Two years ago today I found out you were on your way. One year ago tomorrow, I went to a concert and I heard that still small voice in my heart assuring me that there would be more children, that you were not meant to be an only child.

Today, you are a big sister. Tonight, your brother is sleeping soundly on your daddy’s chest, and right now, I wish you were here more than ever. With each snuggle, snore, dirty diaper, cry and feeding of your baby brother, I wish I’d had that time with you when you were born. Leo is the sweetest, and he fills my heart with so much joy, but even as full as my heart is now, it is still broken.

How can my heart be so complete and so broken at once?

Yet, I should tell you, sweet girl, that even though my heart is broken, even though our rainbow baby is here, my heart wouldn’t be complete without you. I would never trade you. I would never wish to have not gone through what we did together – your life and death and your presence in my heart. I cherish it all and I love you more each day, as I miss you more each day.

I love you so much, Joanna.

It’s been forever. I know. I’m approaching my 27th birthday and excited for my 28th year on earth. True story: my 27th year was pretty amazing.

I am going to recap, as I am going to try harder to blog more often. I’ve been writing in my journal at night when I can’t sleep, so I will share some of my thoughts with you from those pages, as well. But first, the mass update.

In February we took a weekend trip to Luray Caverns. We stayed a the Mimslyn Inn and visited the caverns and the museums, and finished off the weekend at the Caps vs. Pens game.

In March we went to NYC. We saw Chicago and Wicked. We visited Times Square, walked across the Brooklyn Bridge, ate Ray’s Famous Pizza (not sure how famous it really was, but it was tasty, so, that’s good)! We tried new restaurants, 44 1/2, Penelope’s, The Meatball Shop, The Shake Shack (which we apparently have in DC, so we’ll be looking for it)! All-in-all, it was a wonderful trip with my wonderful husband and I will remember it forever.

In April Bill was promoted to Management Trainee, overnight. He loves it and we are able to see each other so much more often. Also in April, my boss from WRX, where I was contracted most of last year, called and said he finally had a full-time, permanent position available and he thought of me. Did I want it? Well, I was having THE WORST time at my old job. I was unhappy with my boss, I was unhappy with my boss’ boss. I was unhappy with my 1.5 hour commute each day, each way. I said, “of course!” I interviewed and was offered the job in just three weeks. OPNET/Riverbed tried to get me to stay, but I told them there was nothing they could do, so they let me go without a fuss. I got a nice pay increase and I LOVE my boss, my office, my commute and what I’m doing. Never a dull moment. And I’m still at Wegmans (will be getting my 9-year name tag in about a week). Lots of babies were born between March-May….sister-in-law Kimmi had baby Allie…bestie Erin had baby Annakay (more below).

In May I started my new (old) job. We spent a lot of time with our friends Blaise and Matt and their new baby girl, Gianna. We went to see The Band Perry in concert and it was AWESOME. I had to make time to spend with my girl, Temi, from OPNET/Riverbed. She took a new job back home in Nigeria and moved in June. It was a very sad time, we became quite close (even road-tripped to Atlanta for a coworker/friend’s wedding in April) and I miss her and her shenanigans very much.

In June, we went to Butler and celebrated Bill’s brother’s wedding. He married Ashley, his girlfriend of MANY years, and they have two lovely children together (and are expecting their third in April 2014. In addition to that, Liz and Kendall had baby number two, Mr. Emerson David, and he is so sweet. I met him via Skype, and Cora and I talked about dogs and cups (I think). 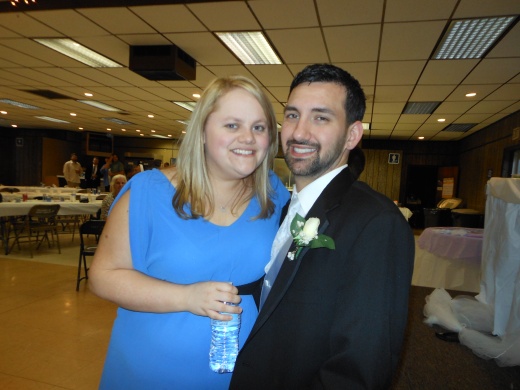 In July, I got to go home for the 4th, plus I was able to celebrate my best friend’s upcoming marriage — her bachelorette party at the end of the month. We also got to go to a Pirates game at the Nationals Stadium with Jackie and Stephen. It was SO great. This month we also ended up signing our lease for 14 more months. There are so many options as to what we will actually do…move home, move to somewhere else (maybe State College?), buy a house in Fairfax, buy a house outside of Fairfax where it’s a bit cheaper…we will just have to see.

This month, we went home to celebrate my Aunt Penny’s marriage to Doug. She lives in Chicago now. We also went to a Pirates baseball game in Pittsburgh on the way home. The Pirates lost after 16 innings but we did have a lot of fun! And you know, the Pirates are probably going to have their first winning season in 20 years…so it’s worth it to be there! Bill got an autograph from Sanchez, on his SI magazine (Pirate on the cover). Also this month, I was able to go home for Noelle’s bridal shower, which was just last weekend. My mom and I took her out for some drinks and dinner and gave her some…lingerie! It was very fun and she shower was also nice.

Friday is my birthday party. It’s also a bittersweet time for me. I miss Grampa more around this time of year than ever. Sometimes I’m afraid I’m losing my memories of him, but I still have pictures and home videos, so I like to turn to those when I get sad. I’ll never forget how tightly he would squeeze me as everyone sang Happy Birthday to us. I won’t forget how we always blew out the candles together and how much easier it is to do with two people. I loved how loud (and out of key) he would sing, and how he would sing my name. And I loved how I sang it right back. Special times.

And through all of this…we are not yet expecting our little miracle. But, we are hopeful. And we know it will happen when the time is right.

Here’s to another year, a happy life, and wonderful husband, great family, lovely friends and a satisfying job!

Bill finally got his big promotion! I really shouldn’t say finally because once you’re a team leader, Wegmans policy is that you stay in your position at least a year before you can apply for something new/higher. So he got full time two days after we started working in Fairfax. Then he got Meat Team Leader about six months later, in April 2011. Then in March 2012 he was promoted to Service Team Leader (11 months). Only 10 months later he already has moved up again. I am so proud of him. He will be the Overnight Management Trainee for about a year then he becomes the Overnight Manager. It’s exciting because it means we both have jobs now that show our hard work paying off. Some days it feels like we just work and work and never get any where. So this is big!

Less exciting is the continuous journey to start our family. We are trying, but are now dealing with a very temperamental Aunt Flo. She visited two weeks early last cycle and had not yet visited this cycle, putting us at 42 days since she last stopped by. This has prompted two pregnancy tests. To our dismay, they have been negative. Aunt Flo is being rude…she will probably show up completely unannounced just when we don’t want her company, AKA this weekend in NYC.

Speaking of good, old New York, New York, I’m excited to go! The last time I was there was in college and we were on a class trip. We went all over Manhattan but didn’t really see much. I saw Times Square and ate at The Hard Rock New York but that was about it. This time we will go atop the Empire State Building and Rockefeller Center. I will go exploring Central Park and discover the exact spot where Kathleen Kelly tells Joe Fox, “I wanted it to be you. I wanted it to be you so bad.” It’s just too bad we aren’t going in the Fall, or I could wander saying, “Don’t you just love New York in the fall?” In case you didn’t know, You’ve Got Mail is one of my favorite movies of all time!

We are also seeing a show on Broadway! Wicked! Almost everything on my New York City bucket list will be complete. I wanted to go to the Statue of Liberty and Ellis Island but Hurricane Sandy did extensive damage, soooooo, it is closed indefinitely. We have a few places picked out for eating meals and I am set on eating a real NY bagel at least once.

The best part will be seeing Bill. I’ve hardly seen him since we got back to VA after our visit home last weekend. Four days of just us, hanging out and having fun. Can’t wait!