Deciding what you’ll say when someone asks that (horrible) question of “Do you have children?” really isn’t that hard. After multiple discussions at our support group, and reading quite a few articles, I had decided my response was going to be simple, but honest.

I have a daughter, but she passed away.

But no one tells you how hard it will be to make those words come out of your mouth.

Thankfully I have only been asked three times. The first was only about 3 weeks after J died and my immediate response (and well-rehearsed in my childless years) was a simple, “not yet.” When I left the store with my mom, I snuggled Elephant in the car (I was not able to leave the house without her yet). I cried. I still can’t tell you if I was crying because I said no when I wanted to say yes? Or if it was just sadness that my baby was gone and I couldn’t do anything about it. Probably both.

Three months after Joanna went to Heaven I was asked the same question by a very sweet employee at the eye doctor. She was just making casual conversation. Her name was Jessica, and she had just finished asking how long Bill and I have been married. “It will be five years in September,” I told her. She seemed impressed and told me she wished her man would propose to her. They’d been together seven years and had a five year old. I knew what was about to happen but I didn’t try to change the subject.

I told her, an answer I had thought of over and over since the first time I was asked, yes. “Yes, we just had a daughter in December but she was stillborn.”

Jessica looked at me with sad eyes, maybe she was even tearing up. She said she was so sorry for our loss and then proceeded to tell me about her own loss at 16 weeks and her subsequent infertility. We talked a bit about our losses, intermixed with trying on glasses and details about potential laser surgery for Bill.

Two things strike me about this conversation, looking back. One, how brave I was to share my story. It’s not an easy thing to decide to tell a complete stranger what has happened to you. It’s hard to know how they will react, what they will say, if they will ignore your comment, accept your comment, or end the conversation altogether. People don’t like to talk about babies who die, and they don’t like to think that their children are not immortal. The second thing that strikes me is that this girl thought it was a good idea to ask me such a question.

We discussed this recently in support group. Now that such a sad and painful loss has happened, it causes you to pause before asking questions related to this topic when talking to strangers (or even to acquaintances or old friends you may not have spoken with in a while). As a fellow loss-mom, didn’t she know what sort of question she was asking? Didn’t she remember what happened to her baby and that maybe it was not a good idea? I have stopped asking people about children–about when they plan to have babies, if they have babies. I know how it feels to be on the other side and to be dealing with infertility or baby loss. People will tell me what they want to, when they want to.

And the third time I was asked about my family situation was this weekend. I was invited by my friend to visit with her and her family on Saturday while I am in California. I was finally able to make a work trip that included a weekend so I could do some sight-seeing and exploring. The invitation was to go visit at her house for a while, meet the kiddos and then head to Stone Farms for fun, food and beverages with a bunch of her friends, their husbands and children. I, of course, said yes! How much fun was this going to be?!

Someone is bound to ask you if you have children, Carol. What will you say? And so, the answer came, the same answer I always decide upon: I have a daughter, but she passed away.

Truth be told, I had a fantastic time that afternoon. I enjoyed the company of new acquaintances. I loved hanging out with my friend outside of work for a few hours. I enjoyed meeting her children and husband. I had a delicious root beer, saw some pretty flowers, listened to children laughing for hours and thoroughly enjoyed the perfect weather.

But, someone did ask me about my family.

The thing is…what DO you say? I could have just told her. I could have said Joanna was perfection and we miss her every day. I could have said anything, but I didn’t. It’s because there’s always an ongoing battle. Even when prepared for it, I still fight. Do I want to mention my sad story, and therefore bring down the mood of anyone who overhears? Or do I just skip over it to save all of these mothers of wonderful children the heartbreak of my story?

I guess I chose to skip this time.

And even though I had a blast (and would do it again), I still went back to my hotel room and cried.

As many of you (oh, so sweet and wonderful) readers of mine know, Wednesday marked four months since losing Joanna. You also probably know that I have been in California for a work trip.

The down side of this is that I was not home with Bill on this four-month mark. No hugs from Joanna’s daddy to squeeze my heart with comfort and tell me it’s OK to cry and it’s OK to be sad and it’s OK to miss her. I also miss my puppy, who of course knows when I am feeling down.

On the plus side, I love the marketing team as it stands today, especially the fact that I call the girls on the team friends. We’ve had a fantastic time this week, margaritas and Mexican food in Laguna Woods, putting our (OK, just mine) toes in the sand and the Pacific Ocean, handmade Italian dishes in Carlsbad during our team dinner, and the most gorgeous California sunset I’ve seen to date while walking Manhattan Beach. Not to mention spending an evening with a great new friend having a pizza dinner in my hotel room watching Chopped.

It’s been a great week. But smack-dab in the middle was that day, April 29. Some people let the day come and go without thinking of Joanna, while others sent a little message or posted on my Facebook wall. It really can help a heart heal to know how much others love and care for you, and how much they loved your child, even if she arrived silently and they didn’t get to hold her or see her pretty, little face.

But there is one problem. As a human being, sometimes you just need a hug. No text, email, call – can replace a hug. Away from home all week, I was struggling through the day Wednesday. I was happy on the outside. But on the inside, I was hurting and missing my baby. It’s true! I just needed a hug – a physical acknowledgement of my pain, and a reminder that I’m surviving.

Instead, I went back to my hotel room and tried to sleep.

But today, this great thing happened. My wonderful, sweet friend took some time to get away for a few minutes, just the two of us. She bought me a coffee and we caught up with each other between meetings. As always, she listened to what I had to say, and I knew she really cared. Just like I knew she cared four months ago when Joanna died. Just like I knew she cared when I felt like I couldn’t be at work on my first few days back and she called to check in on me. And you know what? She hugged me today. Whether or not she knew how much I needed it, it happened. And I am so grateful.

So today, I am finding God’s grace in co-workers, co-workers I can call friends. Who care about what is going on in my life, who take the time to make sure I’m doing OK, who laugh with me, who make work enjoyable and fun (even on the stressful days). Gracious friends who take good care of me, with kind words and comforting hugs.

I am going to miss being in the same city as you (“amazing, wonderful, perfect”) ladies. 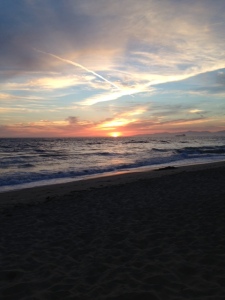 I am flying to California as I write this. Actually, I’m probably already over California right now.

The last time I came here I had you! You were a tiny little bean, just six weeks along. During the trip all I wanted to eat was guacamole. Plus, I started to get morning sickness, but only in the evenings.

Maybe the best part of my trip was that by the end of it, I was the “most pregnant” I had ever been. Coming home from California and being almost seven weeks was a relief. It was a milestone for us, since before you, we lost a baby right around the six-week mark. You were still with us. You were still growing.

Sometimes I wonder, when there is another baby…will we feel relief when we make it to 26 weeks? 25 weeks and 5 days was when we found out you had gone to heaven already. I think there won’t be any relief until your brother or sister is in our arms, crying, full of life!

If you had not left us, I would not be going to California today. But somehow this trip feels like the start of a new journey. One that will be scary but one that your dad and I are willing to make.  I’m glad you’ll be with us every step, in our hearts and minds.

Today after work I let the dog out, as usual. I stood in the fading sun at the sliding glass door and watched him run around. I think, someday, he would have loved running around with Joanna.

When he ran around the corner out of sight, I moved over and looked at the calendar. I picked up my Sharpie pen and started adding. “Bill to Rochester” for a week. “Carol to SoCal” for a week. “Mom and Dad Overnight” one weekend in April. “Emily’s Bridal Shower,” “Amber in Town”.

As I added these things to the calendar I realized that the big trips I was writing down would not be happening if Joanna had been born [alive] when she was due, April 7. Bill couldn’t have left for Rochester a week after her birth. I would not be going to California for work, since I wouldn’t even be working.

While I am going to look forward to California for the next few weeks, and I am sure I will have a good time with my co-workers and hopefully see the Pacific again, I will be wishing for a different scenario. While Bill is in Rochester I will be wishing he were with me, with us – our little family of three (ok, four, counting Heinz).

The calendar reminds us that our lives do continue on, they must. We cannot stop time; change; things out of our control. We can only remember what has been, and try to look at the future with hope.